Have you ever felt like you are spinning or that the world is spinning around you? Like you are on an amusement park ride, but really aren’t? Vertigo is a sensation where you feel off balance and is often caused by the inner ear.
The inner ear consists of two components that can contribute to vertigo: otoliths and semicircular canals. The otoliths consist of the utricle which is sensitive to horizontal movement and contains crystals, and the saccule which provides information about vertical acceleration and translates impulses to the brain. Three semicircular canals (posterior, horizontal, and anterior) exist which are filled with a fluid called endolymph and a sac at the end called the ampulla.
During head movements the fluid flows within the canals causing a displacement of the hair cells within the ampulla which then transmits impulses to the brain about orientation. Positional vertigo, which is commonly treated in physical therapy, is caused by an increased pressure in the ampulla due to inappropriate feedback to the brain regarding head position and motion.
Vertigo can also occur with symptoms of light headedness, nausea, impaired balance, vomiting, visual changes, hearing changes, cognitive changes, and poor depth perception.
The most common vestibular disorder is Benign Paroxysmal Positional Vertigo (BPPV) which fifty percent of the time does not have a cause. Higher occurrence does occur after the age of fifty. During BPPV the crystals in the utricle move into the semicircular canal which cause pressure and impaired signaling to the brain.
BPPV can be diagnosed utilizing several tests: Dix-hallpike, Roll, and Head Hanging. During these tests the physical therapist will look for nystagmus (involuntary oscillatory movement of the eyes). After obtaining a positive (nystagmus) test, “maneuvers” are then performed to drain the crystals out of the canals which then normalizes the pressure within the inner ear.
When the patient has complaints of vertigo/dizziness but does not have BPPV, vestibular rehabilitation can also be performed, focusing on habituation (repetition), adaptation (adapt), and substitution (use of non-vestibular).
If you have any questions regarding vertigo or other vestibular disorders, please stop by or call your local ApexNetwork Physical Therapy Clinic. 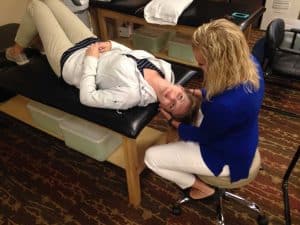